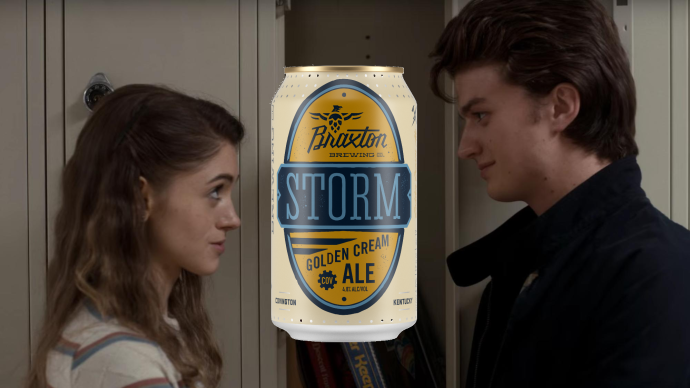 Forreal, Barb, wtf. No one would laugh at you if you couldn’t shotgun a beer you didn’t want. No one would even think twice if you tried and poured half out. But you gotta go and cut your hand open? Like it’s impossible to penetrate a can? FOH. Fuck right on outta here, Barb.

I’m starting to see why so much has been written about Barb. She’s the goody two-shoes friend everyone needs, but might not always want advice from. So, here’s my official position on Barb (and Braxton’s Storm, while I’m at it): following Sheltowee’s Hop-a-Lot IPA with Braxton’s Storm is like replacing George W. Bush with Barack Obama, Matthew Dellavedova with Kyrie Irving in the Finals, or Barb with literally any other character. I respect Barb as a person, but do I want to watch her on a TV show? That is a super firm “Nah.” I laughed out loud when Barb cut her hand and ran inside, then music started playing when everyone jumped in the pool and had a blast right after. That was so tight.

I had to take a sip of that Storm just to salute the rest of the Stranger Things cast for that one. It’s really good, and it does have a thick, creamy after taste, which I was curious about. Isn’t that a fuckin’ pitiful description of a beer? Maybe I’ll get better at that as this goes on, but probs not, so whatever.

What I can tell you is that Braxton Brewing Co.’s beers are new here in Lexington, just kicking things off last week. They’re based in Covington, KY, and I’ve been hearing their taproom hyped up quite a bit from my handful of craft beer friends. For my fairly low standards, it definitely lived up to the hype. The unique creamy flavor was unlike the few similar ales I’ve tried, and standing out really seems to be half the battle. As I mentioned in Episode 1, I’d much rather have gotten Storm for my first growler, and now I’m even more upset that I couldn’t. Shout out to The Beer Trappe for hookin’ me up with what looked like their last single Storm can. They’re super nice there and gave a new guy the low down on everything.

I hope Barb’s hand heals up and she learns to shotgun a no, a Sheltowee Hop-a-Lot IPA. That would be awesome.