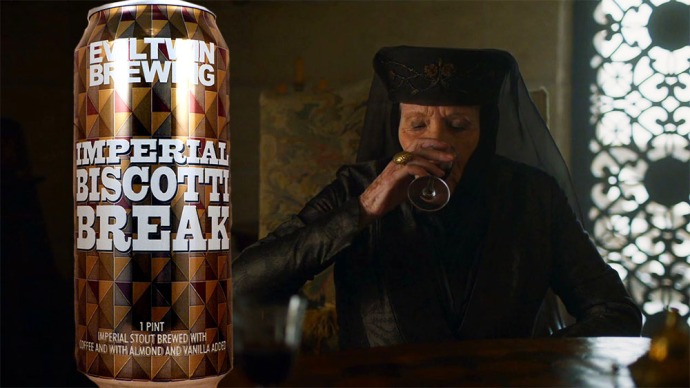 That’s right, folks. Game of Thrones writer Bryan Cogman gave us a warning this week. But it took a different turn than I was expecting.

Doozy, Cogman says! This comes a week after the Greyjoy Bowl. Um, how? Euron rode a wrecking ball through Dany’s plans with Yara, and now I’m tryna get ready for a doozy? I’m ready.

Once I saw this, I threw Evil Twin Brewing’s Imperial Biscotti Break in the fridge right away. The pint can pours out a pitch black drink with a thick, tan head of foam, and you catch whiffs of chocolate soon as it hits the glass. This is up my alley.

Jon runs up on Dragonstone to meet Dany, which was pretty surreal when you think about it. Everyone has imagined this happening since the show began, and it’s finally here. It almost didn’t seem possible, but it was and delivered. They weren’t feeling each other at first, as two strangers talking kingdom chess and undead armies probably shouldn’t. Anyway, in a show that has to keep it movin’ now, this was a nice change of pace.

This was actually a big chunk of the beginning of the episode, and suddenly I realize this stout isn’t as awesome as it started out. Usually flavors become more pronounced in stouts as they warm, but I swear, this one became dull the longer I watched Tyrion squirm tryna get these two to dance. Ultimately, I wouldn’t call this thing a #banger, but it’s a solid stout no doubt.

By the end of the episode, I was ready to pour my last bit out for Lady Olenna Tyrell. What an F-N-G (a fuckin’ G, to be clear.) Jaime may have shown up to kill her, but she had the trump card: layin’ the “I killed your son” smack down on the King Slayer. Ouch. Brutal. F-N-G, honestly.